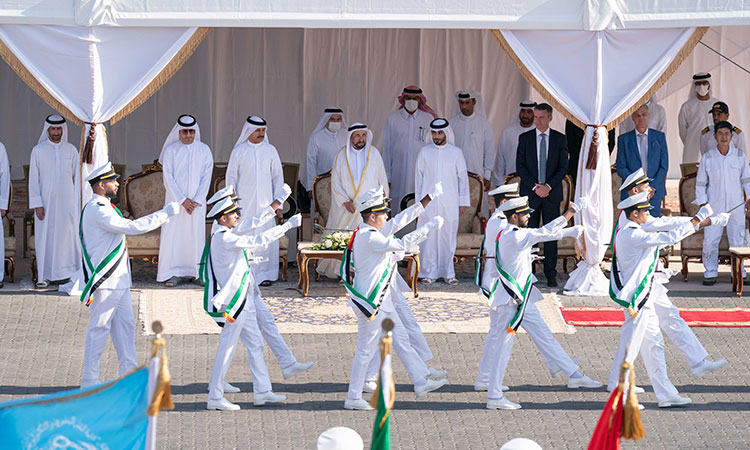 His Highness Sheikh Dr. Sultan bin Muhammad Al Qasimi, Supreme Council Member and Ruler of Sharjah, has praised the great interest of the students of the Arab Academy for Science, Technology and Maritime Transport (AASTMT) during their studies in general, and their practical training at sea in particular, which reflects his vision in educating students at the highest academic and applied levels.

His Highness speech came at the inauguration of the maritime training for students of the Arab Academy for Science, Technology and Maritime Transport on Wednesday morning (December 7 2022), which was held in cooperation with the Sharjah Ports, Customs and Free Zones Authority, at Khalid Port in Sharjah.
Sheikh Dr. Sultan stressed the importance of practical training. "This is a tremendous moment that we have been waiting for all these years, you started your journey reading lecture notes in the classrooms and training on simulators in college, and now you will have practical knowledge.”

His Highness asked the students to be vigilant and careful in their learning, emphasizing the need for vigilance in handling maritime training.
He affirmed his great keenness at following up with the progress of the training, and urging the students to establish direct communication with trainers, wishing them success, excellence and a safe return.

Maritime navigation students will spend 12 months in training and working on board ships that conform to international specifications, while students specializing in marine engineering technology will complete 6 months in training, under the supervision of specialised and qualified international trainers, after which they will return to the academy to complete their remaining courses.